Beneful Recall: What You Need to Know to Protect Your Pets This top-selling dog food brand has long been a favorite of canines and their human companions, but now there is another Beneful recall. Dogs love the taste, and humans love that it at least appears to have chunks of vegetables in the meaty blend. Oh, and we can’t forget that at around $1.00 per pound, it’s a lot cheaper than most premium dog foods.

Some Purina Beneful Dog Foods are Under Recall 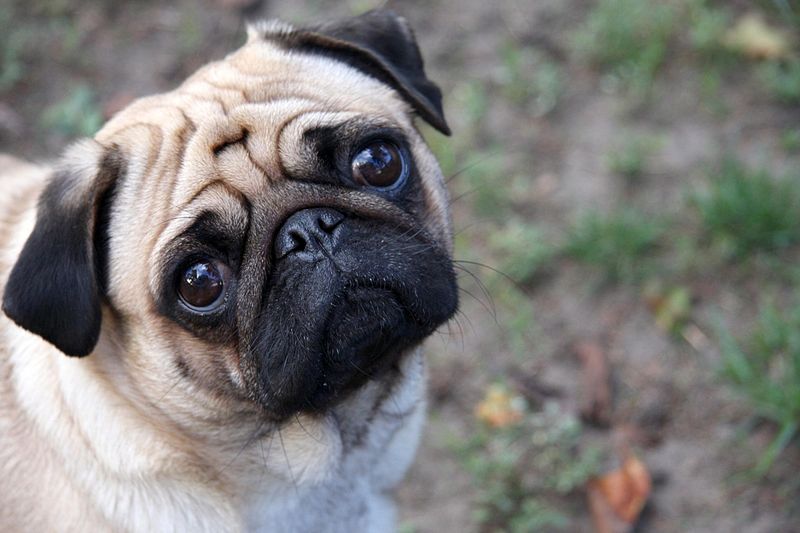 Image CC by A-SA 3.0 Unported, by DodosD, via Wikimedia Commons

Unfortunately, Beneful, which is made by Nestlé Purina, the same company that manufactures the age-old favorite, Purina Dog Chow, has a track record that’s less than stellar. In March, the company had to recall Beneful’s wet dog food tubs.

Why is Beneful dog food under recall?

Purina issued a voluntary recall for Beneful in March that said that the food lacked vital nutrients, like vitamins and minerals. The recall includes:

Here is a full list of dog foods affected by the recall, including the specific sell-by dates. If your dog’s food does not match the sell-by dates or production code ranges in the recall, the food is presumed safe.

How dangerous is Beneful to your dog?

This particular batch of food doesn’t seem to present a real danger to your dog, but long-term, your dog could become malnourished, and her health could begin to suffer.  Almost since its first release in 2001, though, Beneful’s reputation has been shrouded in controversy.

Beneful’s dissatisfied customers lodged some brutal complaints, which range from gastrointestinal problems to near immediate death. These claims are all anecdotal, meaning that they haven’t been scientifically verified, but there are hundreds of them.

Here is just a small sample from the Consumer Affairs website:

Our beloved family pet, a Chihuahua named Chewy, died this past week suddenly and unexpectedly, and I believe that Beneful dog food may be the culprit after discovering that thousands of pet owners reported similar illness and deaths of their dogs while eating Beneful. Beneful Incredibites was Chewy’s primary food source for quite some time. One evening we noticed that Chewy’s right hind leg was so swollen that he could hardly walk on it.

Upon further exam, his stomach was purple and black toward his back legs. We were going to take him to our family vet the next morning, thinking he may have something wrong with his leg, but he did not even make it through the night. Around midnight he woke us up screaming in pain, and at that point he went downhill fast and died soon thereafter. He did have some bloody discharge/vomit come from his mouth shortly before he died.

My boyfriend bought our dogs Beneful Healthy Weight and my lab started throwing up blood. My German Shepherd won’t even finish her bowl of food and she’s been throwing up too! Do not feed this food to your dogs! If my dog dies, I am suing Purina!!!

I switched my dog from an expensive brand to Beneful. It ended up costing more and my dog almost died. She had seizures and I had to find a vet that would take her on a Sunday night. I wouldn’t recommend Beneful to anyone who cares about their pet.

And this absolutely heartbreaking story:

Original review: Two days ago I fed my dog dry dog food instead of his usual wet food. He was acting fine. In less than 12 hours he was dead. He was never ill not once in his life. At his death his teeth/gums were in top shape, fur coat healthy and weight was just right. Yesterday he started vomiting Beneful up, mixed with blood then mucous and blood. I found him laying down sitting up partially then all the way and barely breathing (within 5 min) I was carrying him out to car when he died just before I got to the car.

Beneful’s ingredients included propylene glycol (a petroleum product, but not to be confused with ethylene glycol, which is antifreeze and is deadly to dogs), mycotoxins and heavy metals, but all within government limits. They also contained several dyes.

Is the government doing anything about it?

The Food and Drug Administration received enough complaints about Beneful that they investigated. According to the report, released under the Freedom of Information Act, the FDA felt compelled to run their own tests because of all the consumer complaints. Their own testing, though, proved to be inconclusive.

The testing did not identify a cause for the illnesses. However, given the increasing number of consumer complaints, FDA further analyzed all Beneful-related consumer complaints received from March 2011 through February 2013, and initiated an investigation at three Nestle Purina manufacturing facilities. Laboratory analyses of samples collected during the field investigations revealed certain violations in labeling and elevated levels of cyanuric acid and ammelide in six other samples. These substances were present at levels that would be unlikely to cause a health hazard. Further testing by a third party using a different analytical method indicated that these analogs were not present in a split sample.

How did the court rule?

Most of the complaints were from consumers and not veterinarians. And, since the FDA was not able to pinpoint a cause of illness, they ruled that there was “insufficient evidence” that Beneful caused the health problems.

The FDA tried to inspect three of the company’s plants, and the largely redacted reports imply that managers were less than cooperative. The plant managers refused to provide some specific food samples. They also refused to make copies of some documents. Inspectors weren’t allowed to take photos.

Here is a sample:

Not surprisingly, the inspectors found “no objectionable observations.”

What you can do about the Beneful dog food recall?

Is This the First Beneful Recall?

This is Beneful’s first recall, but in 2015, former customers filed a class action lawsuit, claiming that 1,400 dogs had died because of Beneful. The expert witness was a veterinarian who claimed there were several toxins in Beneful, but none were outside the FDA’s standards. The judge found eventually dismissed the case because the plaintiffs, and their expert witness, couldn’t prove that Beneful caused the dogs’ deaths.

Despite the fact that the lawsuit was thrown out, Beneful did suffer a public relations setback, so they reformulated all of their dry foods.

They also cleaned up their formulas by removing sugar and propylene glycol. They also decreased the number of dyes they used, but their foods still contain artificial colors.

How is Dog Food Regulated?

The Food and Drug Administration regulates dog food similarly to the way they regulate people food. It’s their job to make sure that food is safe, accurately labeled, and made in sanitary conditions.

How to Make Sure Your Dog’s Food is Safe

There are hundreds of dog foods on the market, from small-batch gourmet labels to foods made by behemoth companies like Nestlé Purina. Fortunately, thanks to the internet, it’s never been easier to find out what’s in your dog’s food and what the best and worst are out there.

What ingredients to look for

Experts recommend that you look for meat, not meat meal or meat byproducts, as the first ingredient. Many (but not all) experts prefer grain free and additive free. Preferably, your dog’s should have meat, perhaps some veggies, some vitamins, minerals, and some supplements like omega-3s and probiotics.

Consumer Affairs recommends that you look for high-fat food for very active dogs or dogs with kidney disease or cancer. Dogs do need some carbohydrates. Sources like some rice, sweet potatoes, and even fruits can provide the well-rounded diet your dog needs.

Wet dog foods are an excellent treat, and enticement to eat a meal or a great alternative for an elderly dog. They are considerably more expensive than most dry dog foods, so many dog owners use a combination of wet and dry. Here are just a few of what Dog Food Advisor recommends: 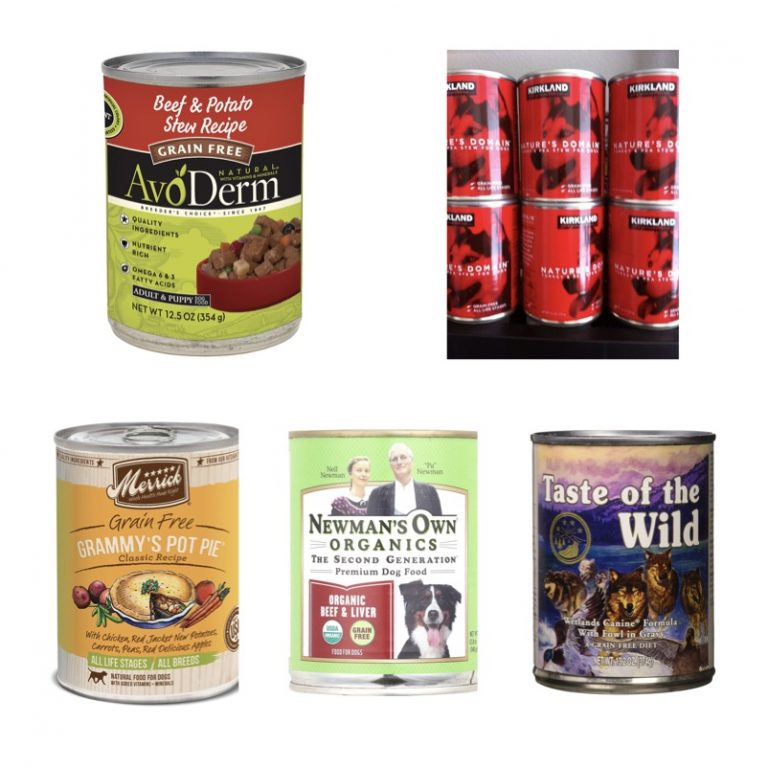 Composite Image: Amazon (as listed below)

Here are five of the best:

Merrick Grain Free: With formulas like Grammy’s Pot Pie and Thanksgiving Day Dinner, Merrick Grain Free seems like something you could feed to your children. You probably could. The ingredients include meat, some veggies, and no artificial anything. You can find Merrick for less than $3.00 per can.

Newman’s Own Organic: As the name implies, Newman’s Own is all organic. It contains meat, some vegetables, and other nutrients, and no grains. The cost is roughly $3,00 per can. Best of all, all the profits go to charities.

Dry dog food is among the most affordable ways to feed your dog, especially since the food is relatively shelf-stable, especially in an unopened bag. 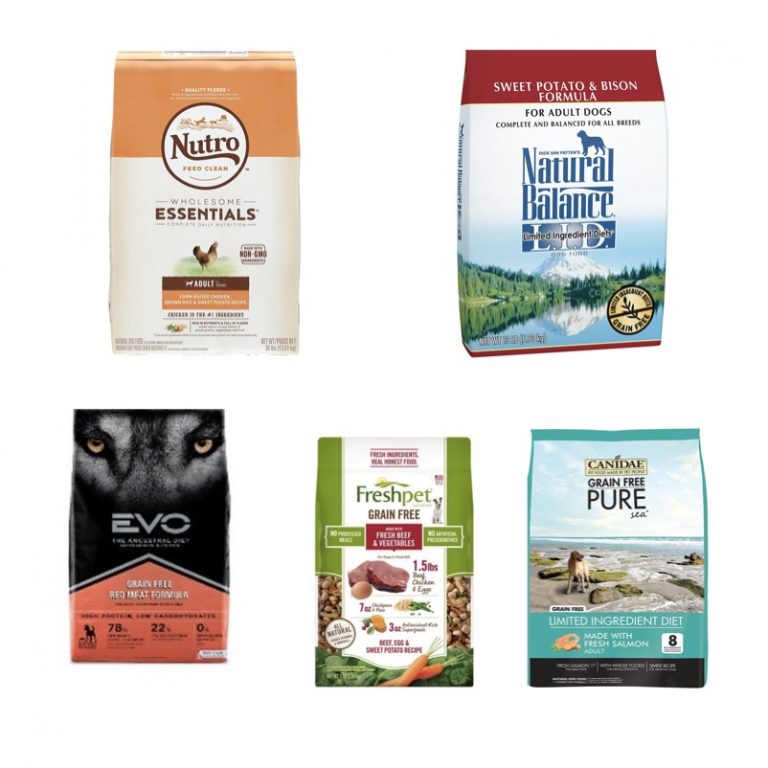 Image Composite: Amazon (as listed below)

Canidae: Consumer Affairs’ most highly recommended dog food is Canidae. At less than $60 for a 44-pound bag, Canidae is relatively inexpensive, as high-quality foods go. Canidae contains lots of real meat, followed by ingredients like probiotics, antioxidants, and omegas.

Freshpet: Freshpet is on the pricier side, at about $10 per pound. They use all fresh ingredients, with no additives except for vitamins and minerals. Their food, unlike most dry dog foods, needs to be refrigerated.

Evo: Grain-free Evo foods are supposed to bring out the wolf in your dog. Their food is high protein, low carbohydrate, and full of pure meat with added omegas. Evo is somewhat pricey, at about $30 for a 6.6-pound dog, but they claim that it’s so nutrition-packed that your dog won’t need to eat much.

Dick Van Patten’s Natural Balance: Not only does Natural Balance contain real ingredients, like meat and some vegetables, but they also provide test results with every batch of food. Look to pay around $3.00 per pound, which is normal for a premium dog food.

Nutro: Nutro, with its natural ingredients, free from soy, corn, and wheat, is a perennial favorite. Founded in 1926, Nutro was a pioneer in healthy dog food. At around $50 for a 30-pound bag, the price is a relative bargain.

There are dozens of excellent dog foods on the market. Many are as good as the foods we’ve named. Check the ingredients on yours and hit the internet. Consumer Search has a good list of reliable rating sources for dog food.

Today, many pet owners are turning to homemade food as an alternative to store-bought. If done right, homemade food can be wonderful. And best of all, you know every ingredient. Consumer Reports warns against feeding your dog raw food, as it can be filled with contaminants.

Making your own dog food is easy and healthy, though. Use ingredients like turkey, brown rice, and veggies like peas, spinach, carrots, and peas. Cook them together, with some olive oil, and you have a gourmet meal for your furkids.